Major Ellsworth was not an unknown quantity in the Northern states.  Previous to the war, Ellsworth and his Fire Zouaves barnstormed in many of the cities of the north, exhibiting their acrobatic martial drill.  Many Northerners would have seen his face before, either in person at a performance, or in the newspaper or playbill.  He was in affect the Kanye West of his day.

A couple of days after his death, The New York Herald ran an above the fold story titled The Assassination of Major Ellsworth with a half page woodcut photograph of the handsome Major.  Previously to the Marshall House incident, many Northerners were at best indifferent to the secession of the Southern states.  There had been no blood spilled up to now and perhaps this was for the best.  However, Major Ellsworth provides the North its first martyr.  Not some unknown farm boy but someone they “know”, one of “our boys.”  Words such as assassination are used.  Jackson in the article is referred to the “murderer of Ellsworth” and the soldier who shot Jackson, Corporal Francis Brownell, is listed as the “avenger of Ellsworth.”

On the Southern side, James Jackson is referred to as a martyr for the cause who was “killed by federal soldiers while defending his personal property and personal rights…he laid down his life, an example to all, in defense of his home and sacred soil of his native state VIRGINIA.”

Both sides now have their respective martyr moment and are using powerful language in the press to describe why the struggle is so important.  Assassination, murder, killed by federal soldiers, defense of his home and sacred state.  These are the types of words that are meant to ignite young men’s passions and encourage them to rally to the Flag.  Now both sides will muster tens and hundreds of thousands of men into their armies and home front support infrastructure.

Alexandria will become a home front support town from that day, ironically for the North who will occupy the city for the duration of the war.  Next, Mercy Street, the real story. 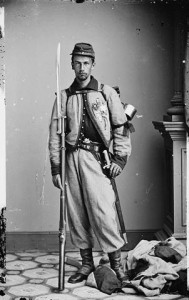 Corporal Brownell, the “Avenger” of Ellsworth