The Athenaeum – By Meredith Barber 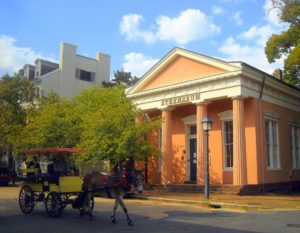 In April 1851, a year that free banking was starting to take hold in Virginia, legislation was passed by the General Assembly to “incorporate the Bank of the Old Dominion at Alexandria”. By December, the construction of the bank had begun. A few months later, the Alexandria Gazette published that “the interior of the Bank of the Old Dominion, which is now nearly finished and ready for use, will present a very handsome appearance, corresponding to its exterior architecture”. The Gazette was right. Known today as the Athenaeum, situated on the corner of Prince and Lee streets, the building still stands out as a handsome piece of Greek-revival architecture.

For 10 years, the Bank of the Old Dominion operated successfully. On May 24th, 1861, the lives of Alexandrians were dramatically transformed – and so was the bank. The Federal Army commandeered the building for their own use. Thanks to the efforts of its courageous cashier, William Henry Lambert, the Bank of the Old Dominion was the only Virginia state bank to repay its stockholders and investors at the end of the war. Shortly before Union troops occupied the building, he loaded all of the assets from the bank’s safe into a wagon and transported them to a hidden spot. Old Dominion Bank closed about a year later, on April 10th, 1862. However, at the end of the war, the bank was able to pay off all of its obligations to depositors out of the hidden cache.

For a short time after the First Battle of Bull Run/Manassas, the Old Dominion Bank was used as a triage hospital for wounded soldiers. Unfit to be a hospital, the building at 201 Prince Street was subsequently turned into the Chief Commissary Office of the US Army Quartermaster Corps. It operated as the headquarters of the US Commissary General of Subsistence in Alexandria and was lead by Captain A. E. Clarke, who received and issued stores in bulk. It was the ideal building for a commissary office, as it had teller windows and a safe.

The above photo was taken by Matthew Brady in 1864. It depicts federal officers gathering in front of the Bank of the Old Dominion and includes a view of the cobblestone-paved Prince Street. The building was a logistical center for the Union army in Alexandria and was frequented by officers working in the city.

After the Union Army vacated the building, Citizens National, a growing national bank, established occupancy. William H. Lambert’s work to preserve depositors’ assets was remembered by many, and he was made the first cashier of Citizens National Bank. The building was transformed into a storehouse for the Stabler and Leadbeater apothecary in 1907. It changed hands again when it was bought by the Free Methodist Church of Northern Virginia in 1925.

Before the foundation of the Athenaeum was laid, the people of Alexandria knew that it would be one of the most prominent buildings in the city. An article published in the Alexandria Gazette on April 9th, 1851, informed readers that the Bank of the Old Dominion “will be an ornament to the town, and convenient to our citizens”. For the last 53 years, the Athenaeum has operated as the headquarters for the Northern Virginia Fine Arts Association (NVFAA). The Athenaeum hosts seven separate art exhibits each year by regional artists as well as high quality music and dance performances, most recently the USAF Band. The Athenaeum thrives due to the membership and attendance of its neighbors. Often overlooked, 201 Prince Street is a gem of Old Town Alexandria.